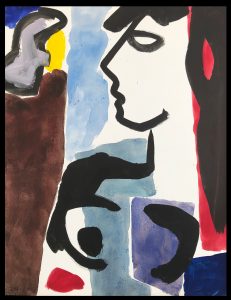 In its 4th edition of the cycle “A Collector’s Story” In 2 parts CULTUREINSIDE GALLERY presents the exhibition “NUS FEMININS (NUDES) of Jacques Nestlé created in the Fifties and of Johann Georg Mueller created in the Sixties & Seventies.

Jacques Nestlé was born in 1907 in Saarbrucken. He died in Paris in 1991. He moved to Berlin in 1925 where he was infl Johann Geouenced by the Bauhaus movement and avant-garde artists, including his contemporaries Kandinsky and Paul Klee. In 1933, he surrendered to the calling of France, and soon joined numerous artists in Paris where the Modern Art revolution was already in progress since the middle of the 19th century.

His art cultivates a deliberate ambiguity between figuration and abstraction, evolving towards a personal form of lyric abstraction in which the artist unleashes his direct expression, a reflection of his inner emotions. His nudes, sometimes stylized to the extreme, in which feminine forms melt into outlines and colored contours, recall the nude curves of Matisse, or the anatomical compositions distinctive of the cubist nudes of Picasso. 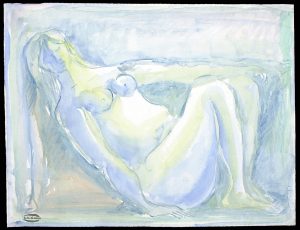 His extraordinary and multi-faceted oeuvre is presented in important oil paintings, works on paper and even later in his photographs. Throughout his life Mueller did not follow any systematic artistic rules and therefore retained the freedom to switch between traditional depictions of motifs, figuration and abstraction.